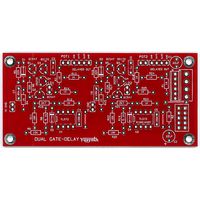 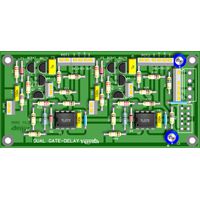 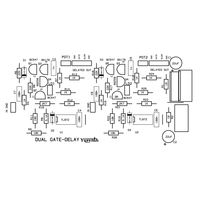 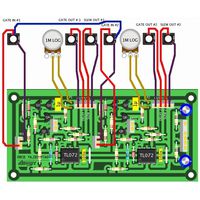 A bare double sided PCB 100x48mm (no need for the wire jumper links shown on the PCB layout) for the Yusynth dual gate delay synth module. These PCBs are manufactured by Soundtronics with a percentage of the sale going to the creator of the YuSynth - Yves Usson. These are early days for the YuSynth Modular Synth at Soundtronics, our plan is to stock PCBs for all of the projects as well as components, kits and front panels. This is going to take time but will eventually be as comprehensive as our MFOS range.

No components are included with the PCB but check out our Synth Components section where you should find what you need. We do suggest visiting the YuSynth Dual Gate Delay project page for detailed information on this PCB.

This module is useful for building up complex cannon sequences, trigger delayed events or to drive a VCA for creating a delayed vibrato.

The output SLEW signal starts rising when the input GATE signal is set, and stabilises at 10V. It returns to 0Vas soon as the input is off.

How this circuit works is quite simple. Diode D1 protects the inputs from negative voltage. When no GATE signal is there, Q1 is not conducting and the gates of Q3 and Q4 are maintained at a positive voltage (+15V).
In such a case, Q3 (N-MOSFET) is conducting and maintains C3 at a potential of 0V, Q4 (P-MOSFET) is not conducting. The U1b OPA is a voltage follower buffer and the output SLEW voltage is at 0V. The U1a OPA is acting as a comparator, the voltage at pin 3 is smaller than the voltage (+10V) at pin 2, the output GATE OUT remains at 0V.  When a GATE signal (>2V) is applied to the GATE input, Q1 becomes saturated and the voltage applied to the gates of Q3 and Q4 is close to 0V. Q3 switches off while Q4 switches on. Therefore, C3  starts to charge  itself  at a rate depending on the  sum of R7 and P1. With the values selected for R7 and P1 the charging time varies  from 1ms to 1s . The output level of the comparator U1a stays at -15V as long as the voltage at C3 is smaller than 10V, the diode D1 blocks this negative voltage and the GATE OUT stays at 0V. When the voltage at C3 reaches 10V it toggles the comparator and its output becomes +15V.  R10 and R11 are mounted as a voltage divisor (2/3) and the GATE OUT signal is limited to 10V.
When the GATE input signals returns to 0V, the status of Q3 and Q4 is toggled and C3 is discharged very rapidly through Q3. All outputs return to 0V.
Transistor Q2 is connected to the output of the comparator and drives a red LED.