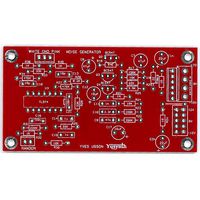 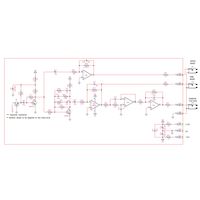 A bare double sided PCB 90x49mm (no need for the wire jumper links shown on the PCB layout) for the Yusynth Noise generator synth module. We also stock this noise generator combined with a sample and hold module, see 7220-046. These PCBs are manufactured by Soundtronics with a percentage of the sale going to the creator of the YuSynth - Yves Usson. These are early days for the YuSynth Modular Synth at Soundtronics, our plan is to stock PCBs for all of the projects as well as components, kits and front panels. This is going to take time but will eventually be as comprehensive as our MFOS range.

No components are included with the PCB but check out our Synth Components section where you should find what you need. We do suggest visiting the YuSynth Noise + S&H project page for detailed information on this PCB.

Noise submodule : Q2 is connected as a reverse polarised diode in order to generate as much noise as possible. This noisy signal is first amplified by Q3 and routed both to U3b which amplifies the white noise signal and to Q4. A network or resistor-capacitors (R2-R24,C9-C11) shapes the spectrum. The result is a low-pass filtering with a 3dB/octave slope giving rise to the so-called pink noise.  Then the pink noise is amplified by U3d which is followed by two low-pass filters to provide slow varying random voltages. The first filtering stage is second order low-pass with a cut-off frequency close to 5Hz the second stage provides a 6dB/octave lowpass with a cut-off frequency of 4.7Hz with some amplification in order to level up the random voltage.

For further information including panel wiring, please see the combined PCB 7220-046 by following the link under the 'Related products' tab above.

The trimming is quite simple, it consists of taking a batch of BC547 transistors and selecting among these which one gives the highest white noise level while being symetrically balanced around 0V level, with the flatest spectrum. In order to do so, it is a good idea to use a transistor socket for Q2, this way one can swap easily the transistors to find the best one. It is a good practice to wait about 1min before checking the noise level and quality of white spectrum in order that Q2 has reached a steady temperature.
Below are the spectra Yves measured on the two boards he built. Some resistor values may also be adjusted to obtain the desired output levels.