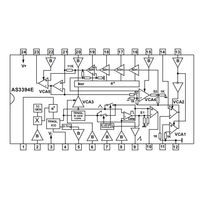 The AS3394E is a complete analogue music synthesiser voice-on-a-chip intended for software control by a microprocessor system. Included inside the compact 24 pin package is fully temperature compensated, wide range, voltage controlled oscillator providing suboscillator, triangle, sawtooth, and pulse waveforms; a voltage controlled mixer for adjusting the balance between the internally generated VCO waveforms and any external signal; a dedicated four-pole low-pass voltage controlled filter with voltage controlled resonance; a modulation amount VCA for modulating the filter frequency by the triangle waveform output of the VCO; and a final VCA for allowing the output to be enveloped. Envelope control for both the VCF and final VCA may be provided by either a hardware envelope generator such as the AS3310 or through software.
Ranging between -4 and +4 volts, all eight control inputs are provided with internal very high input impedance, low bias current buffers. Thus interface to a microprocessor system may be accomplished simply with a single DAC, 4051-type CMOS multiplexer, and 8 hold capacitors.
Requiring a bare minimum of other external components, the AS3394E is ideal for  polyphonic or polytimbric musical instruments featuring rich, analog sound.