COVID-19 (Coronavirus) update: Whilst we continue to ship customer orders, same day dispatch is not guaranteed. Domestic & International deliveries may be subject to transport network delays- please allow extra time for your order to arrive. 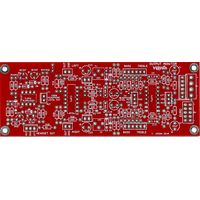 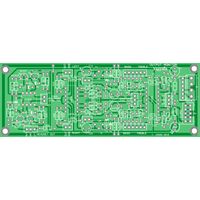 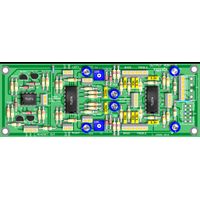 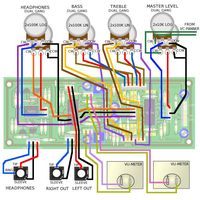 A bare double sided PCB (no need for the wire jumper links shown on the PCB layout) for the Yusynth Output Stage & Monitor synth module. These PCBs are manufactured by Soundtronics with a percentage of the sale going to the creator of the YuSynth - Yves Usson. These are early days for the YuSynth Modular Synth at Soundtronics, our plan is to stock PCBs for all of the projects as well as components, kits and front panels. This is going to take time but will eventually be as comprehensive as our MFOS range.

No components are included with the PCB but check out our Synth Components section where you should find what you need. We do suggest visiting the YuSynth Mixout VC Panner project page for detailed information on both this PCB and the accompanying VC-Panner including Yves panel layouts but a summary is shown below.

The Mixout VC Panner module is the combination of two utility modules :

Yves designed separate PCBs for these sub-modules, therefore it is possible to use either the VC-panner or the output  monitor sub-modules on their own.

The Mixout-VC Panner This sub module is based on very classical circuits that can be found in many electronics textbooks.
For one channel and from left to right :

Output monitor
Set all channels to zero except channel 1, set the TREBLE and BASS pots to 12 o'clock.
Then send a SINEWAVE wave (1kHz) with an amplitude of 10Vpp (-5V/+5V) on the input of  channel1.

Mark, Sorry we missed your question. The PCB is 130x48mm Regards Paul