EU Orders under £125 (€150) - As a registered IOSS company, EU orders include VAT avoiding additional charges and delays for the customer at Customs entry.

EU Orders over £125 (€150) and for EU business customers - Please note, VAT and duty may be charged direct to the customer at customs entry by the shipping company.  EU business user accounts can be upgraded to be automatically VAT exempt on request. 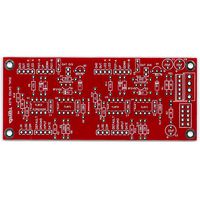 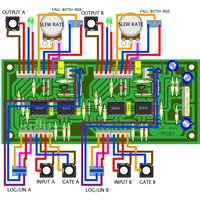 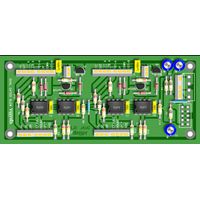 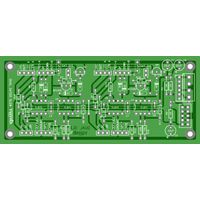 A bare double sided through hole plated PCB (no need for the wire jumper links shown on the PCB layout) 114x49mm for the YuSynth Dual Gated Slew module. The PCBs are manufactured by Soundtronics with a percentage of the sale going to the creator of the YuSynth - Yves Usson. These are early days for the YuSynth Modular Synth at Soundtronics, our plan is to stock PCBs for all of the projects as well as components, kits and front panels. This is going to take time but will eventually be as comprehensive as our MFOS range.

No components are included with the PCB but check out our Synth Components section where you should find what you need. We do suggest visiting the YuSynth  Dual gated Slew project page for detailed information including Yves panel layouts but a summary is shown below.

This is an utility module that may find some use to create gated portamento effects or other slew limiting effect. It is a dual module and each submodule has its own  SLEW RATE potentiometer. A GATE input jack makes it possible to control the slew function (only in the LOG mode though) : GATE OFF --> No slew, GATE ON--> Slew activated. The default status (no jack inserted in the GATE input) is Slew activated. The slew status is shown by a LED. Furthermore two toggle switches are available.

The first one is a three state switch which sets the active slew phase :

The second switch is a two state switch which defines the slew function :

The principle of this circuit is quite simple.
LOG mode :
In the LOG mode, U1a acts as a simple voltage follower (pin 6 is fedback to pin 2), it buffers the input signal.  Let's consider that SW1 is in it's middle position, in such a case the voltage at the output of U1a (pin 6) is going to either charge C3 (if this voltage is higher than that at C3) or dischage C3 (if this voltage is lower than that at C3) through R4 and P1. The greater the value of P1, the longest the charging/discharging time. Then U1b acts as a simple voltage follower and buffers the voltage at C3 to the output.
If we toggle SW1 on the Up lug, then diode D2 bypasses the SLEW RATE potentiometer P1, in such a case the discharging rate of C3 will only depends on R4 (10 ohms) and thus is very fast, while the charging rate still depends on P1. Now if we toggle SW1 on the Down lug, now it's diode D1 that bypasses P1 and therefore it's the charging rate of C3 that becomes very fast and the discharging rate still depends on P1.

LIN mode :
In this mode U1 is no longer a voltage follower of the input voltage but is also controlled by the output voltage of the modules (output of U1b is fed back to the inverting input of U1b). In such a configuration the charging/discharging current of C3 is no longer depending on the instantaneous charge of C3 but is maintained constant. Because this current remains constant the charging/discharging curve of C3 remains linear. However in this feedback loop the Q1 FET transistor will no longer behave as simple switch, that's why in the linear mode the switch SW2-2 disconnects Q1.