UK / International deliveries may be subject to postal delays- please allow extra time.  We are currently unable to guarantee same day dispatch but remain open during the National lockdown.

BREXIT - EU orders no longer include VAT. However, VAT and a handling charge may become payable by the customer direct to the carrier once goods are imported into the country.  DPD, our chosen carrier has suspended deliveries to the EU, alternative carriers are being selected where possible. Postal services remain available. 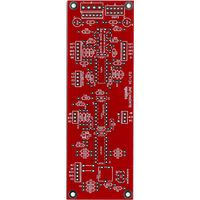 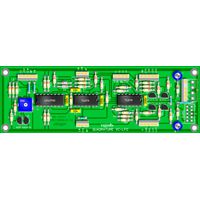 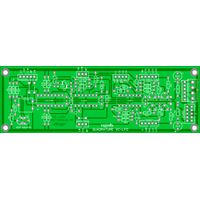 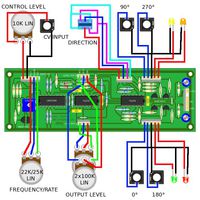 A bare double sided through hole plated PCB (no need for the wire jumper links shown on the PCB layout) 144x48mm for the Yusynth Quad LFO synth module. These PCBs are manufactured by Soundtronics with a percentage of the sale going to the creator of the YuSynth - Yves Usson. These are early days for the YuSynth Modular Synth at Soundtronics, our plan is to stock PCBs for all of the projects as well as components, kits and front panels. This is going to take time but will eventually be as comprehensive as our MFOS range.

No components are included with the PCB but check out our Synth Components section where you should find what you need. We do suggest visiting the YuSynth Quad LFO project page for detailed information including Yves panel layouts but a summary is shown below.

The quadrature LFO is a special module that was not found on many modular synthesizers back in 1970s. Mostly, only companies like Polyfusion, Buchla or Serge would propose such a weird LFO.
Basically, it is a sinewave LFO with four outputs which are running at the same rate but are phase shifted by increment of 90°. That is, the first output has a shift of 0°, the second 90°, the third 180° and the fourth 270°.

What is it useful for ? Mostly it is for modulating simultaneously up to four sources at the same rate but out of phase. This makes it possible to achieve so called "Barber pole" effects or "Shepard tones". For example, imagine that you connect each output of the Quad-LFO to the V/oct input of four different VCOs, then you'll hear continuous though steady (paradoxical, ain't it !) rising and falling intermangled pitches en.wikipedia.org/wiki/Shepard_tone and en.wikipedia.org/wiki/Deutsch_tritone_paradoxsee
It can be used also to drive four VC-panners to create rotating sound effects that fill the stereo space.

The core of the circuit is based on the quadrature oscillator circuit of Ian Fritz's ChaQuO chaos oscillator. Yves modified it in order to have voltage control of the frequency and also I added buffers with output LED indicators and a toggle switch that makes it possible to exchange the phase of the 90° and 270° signals in order to change the direction of the phase rotation. This simple trick is very handy when performing "barber pole" modulations.
Each LED show the positive part of the corresponding signal, they are organized on a circle to visualize the phase differences between the signals.

Connect an oscilloscope on the 0° output, (settings 1ms/square, 1V/square)
Set the RATE potentiometer to 10, the FM LEVEL pot to 0 and the OUTPUT LEVEL to 10.
The module must work as soon as powered however at startup the amplitude of oscillation is quite low (0.1V) and it takes some oscillation cycles to reach the normal amplitude of oscillation (something like -8V/+8V), it reaches its maximum amplitude. When, it's oscillating at its steady amplitude, set the frequency pot to the minimal rate (fully counter clockwise) then adjust the trimmer T1 in order to set the lower rate (the lowest rate achievable is around 30s per cycle).
Now set the rate to approximately 1s per cycle, the LEDs should lit in turn, for example RED, then YELLOW, then GREEN, then ORANGE or conversely. If this is not the case swap the connections of the LEDs. Toggle the switch, now the LEDs must lit in the opposite direction.